I never thought that I would be a spinner. Not because I thought spinners were freakier than knitters as such ::giggle::. But because I gave spinning a go a number of years ago, before Richmond Knitters even before my first Bendigo Sheep and Wool Show. AND I FAILED… TERRIBLY.

I had done the guild beginner course (not that there was anything wrong with the course, I had a brilliant teacher). I got an updated tetanus shot because we were handling unwashed fleece (ergh!) and I had my MIL’s wheel on borrow. In hindsight… I blame the wheel. It was an old traditional style wheel and I don’t think it had had a sip of oil in quite some time. It was sooo damn hard to treadle, making it so hard to concentrate on drafting whilst the wheel was moving in the wrong direction. It was incredibly frustrating, I thought it was me and I thought spinning was just one of those difficult things I would never master let alone fill a bobbin.

Fast forward to the Bendigo Show where Sharon bought her first wheel (about 3 years ago). I was very jealous by the prospect (recalling my failure), nothing really beats handspun. That year I bought my first spindle. Sheesh, if Sharon can do it, I’ve got to try again! The spindle turned out to be a rubbish, read: too light and unbalanced for a beginner; so back to the guild I went where I purchased an identical Ashford heavy teaching spindle to the one Sharon had loaned me. The black electric tape around the hook still makes me smile. That is the first time I had actually spun yarn, where some drafting was involved. By now Melanie was also heavily in on the act by doing the guild course; things were getting serious.

Today my free time is divided between knitting and spinning; I still love knitting a little more than spinning, but I can’t imagine my life without it. Being able to choose beautifully dyed fibres to turn them into yarn and then resulting in a one-of-a-kind handknit is the ultimate sense of satisfaction.

Don’t get me wrong there are still plenty of non-spinners who come to Monday nights, but bit by bit the spinning bug has at least given most people a crack at spinning on a spindle. It’s wonderful to be able to share my latest skein of handspun on a Monday night by a captured audience. Best reactions to FO’s come from Melanie… always 🙂

So if you really think you’re not a spinner, give it a try, or try again, most people learn a lot faster than me.

This is my mum with her handspun, handknit shawl I made for her birthday last year. 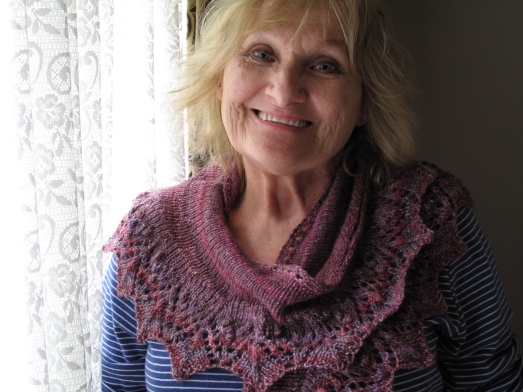 Don’t forget, if you follow our blog before August 19th, you have a chance to win a skein of my handspun. The ‘follow’ button is at the bottom right of this window when viewing the blog on a computer.